At last, after split deliveries, the wrong processor delivered, and what seems like months of waiting, I have finally finished building my new PC! 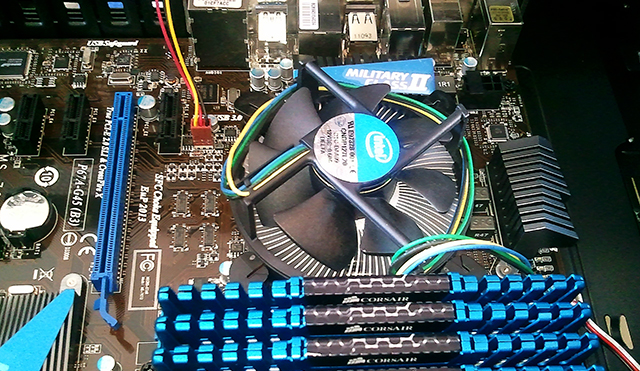 Back just over a week ago, my pc componenets were delivered. And as expected there was my Intel Core i5, however it was a processor designed for a 1156 socket, and not what I required for my motherboard. I had taken photos and videos of me unboxing it, but then I had noticed the mistake.

Fortunately, eBuyer were great about the whole thing, and I sent off the processor to their returns department where they agreed to exchange it. I also took the opportunity to pay a little more for a 2500 version with 4 cores, instead of the 660 with only 2.

I inserted the processor into its socket, and attached the cooling fan to the board, and then began the tedious and messey task of removing the old graphics card and power supply from my existing machine, cleaning the dust from them, and connecting them into the new case, with all the cable management that goes with it.

You can be sure my next machine will use a moduler PSU!! 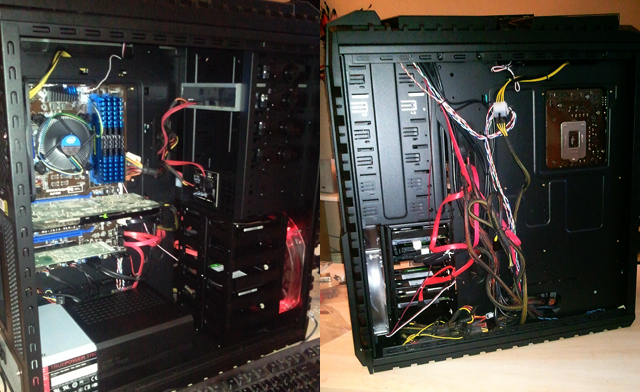 With everything connected, it was time for the moment of truth… I turned the switch on to power up the machine, and there was nothing!

A great feeling of dread came over me. “Oh god I must have broken something” I kept muttering to myself. I checked all the connections, everything looked perfect, so I began disconnecting the front panel cables from the board.

I had connected these on the Monday when the components arrived, so maybe I knocked them loose – or maybe… Turns out I had some of the fiddly connector pins the wrong way round. I thought I had done them all correctly, but until you can check, you can’t be sure.

So with everything in its proper place now, came the moment of truth. CLICK and the fans began to spin, the LEDs lit up in the dark void of this monster case, and the almost Star Trek like beeps from the internal speaker rang out and the TV flickered and came to life with the MSI UEFI BIOS image, and some text about there being no boot drive.

Now releived that it was working, what struck me was how quiet this machine was compared to my old jet engine – I mean pc. Having the larger 200mm fans really has made a difference. You can hear it yourself at the end of the video below detailing the final steps in completing this thing.

As any of you who have built a new PC know, building the machine is only ever half the job. 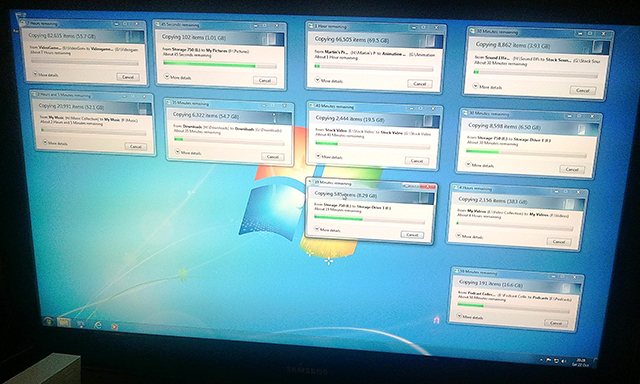 After the building comes the installation. Installation of Windows (or any other OS you happen to like) and all the files and software you have backed up. This time things were a little different from my past experiences, one of the perks of using an SSD, is how much faster everything is, from boot-up to logins and restarts. In only about 3 hours, I had installed Windows 7, installed all the updates including SP1, and made all the tweaks recommended when running it on an SSD (such as disabling hibernation, moving page files, and ensuring the user data folders are relocated). What took the rest of the night – until about 4am – was copying the over 1TB of media and files from my old computer’s hard drives, to the two new 2TB ones.

It wasn’t until Saturday and Sunday that I got round to installing all my software like Microsoft Office, the Windows Phone and Android development kits and software, Adobe and Autodesk animation software etc. 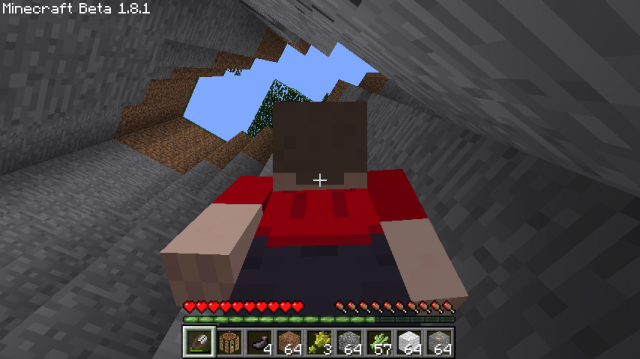 I was planning to update the site with this blog post on Sunday night, but I just re-installed Minecraft and as I was playing, not once did it crash on me and I ended up playing for about 6 hours straight, so I am posting this on Monday!